Platypus – Facts About This Amazing Creature!
By David J R – 2009

Platypus is one of the most interesting creatures on Earth. Its bizarre appearance and some unique features attract me towards it. Lets see how it is different from other creatures.

It is a mammal and lay eggs!

It is one of the only two mammals on Earth that lay eggs. Normally mammals give birth to live young.

Just like its other features, its venom is also something interesting. In case of platypus, only males have have the capability of injecting the venom. It has a spur on the hind foot that delivers a venom capable of causing severe pain to humans.

It has a bizarre appearance. It is an egg-laying, venomous, duck-billed, beaver-tailed, otter-footed mammal. The appearance of platypus baffled European naturalists when they first encountered it, with some considering it an elaborate fraud.

Even its genital parts are of strange nature. The female platypus has two ovaries but only one of them is functional, the left one.

Weird Use of Tail

The Platypus has extra bones in the shoulder girdle, including an interclavicle, which is not found in other mammals.

Other Interesting Facts about the Platypus

It hunts for around 12 hours a day. Seems like it spends most of its time hunting.
Its fur which is plum-colored is waterproof and its texture is amazingly quite like a mole’s fur.
The snout of the Platypus is in fact a sensory organ with the mouth on the underside.
Weight of these mammals varies considerably from 0.7 to 2.4 kg (1.5 to 5.3 lb).
Their eggs are leathery-shelled.
The Platypus is sometimes jokingly referred to as proof that God has a sense of humour.

David has interest in collecting facts about different topics like sports, space, animals on [http://www.factsnfacts.com/].

Platypus is one of his favorite topics and he has a large collection of interesting facts about the platypus on [http://www.factsnfacts.com/living_beings_facts/mammals_facts/platypus/]. 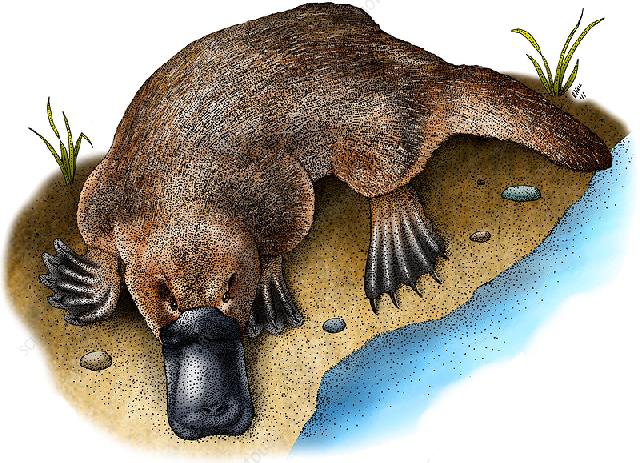