What is the Dreamtime

Dreamtime is a word first used by a European anthropologist in the early 1900’s to define what he perceived as a religion. He used this word to describe the all-encompassing mystical period of Aboriginal beginning.

However, the Aboriginal people do not worship any single Deity or other Gods. They built no monoliths, memorials or idols. Nor did they have an organized religion. They lived by the lores of the Creator and Ancestral Spirits of the diverse landscapes, sky, creatures and plants of Australia.

The Dreamtime stories, are the oral form of the spiritual Dreaming. This comprises: Art, Customs, Music, Dancing,Totems, Lore and Lands.

Art is the visual form, Customs – the practical form and Music – the acoustic form. Totems are the spiritual forms. Lore is the cultural form. Lands are the physical forms.

Altogether, they form an all-encompassing, mystical whole. Over the last two centuries, non-indigenous people have perceived these art forms as separate entities, rather than as part of a whole. The result has been a fragmented overview of the Aboriginal culture.

The Stories of the Dreaming are more than myths, legends, fables, parables or quaint tales. They are definitely not fairytales for amusement of children. Down through generations, the Aboriginal people’s stories were told orally, but were never written down. They were the oral textbooks, of their accumulated knowledge, spirituality, and wisdom, from when time began.

The structure and form of a traditional Dreamtime story is quite unique and cannot easily be copied. An oral Dreamtime story of ten minutes’ length, can cover several topics and subject matters, and be suitable for all age groups. They are structured with valuable lessons for children, or for bringing a renewed understanding to older people.

In the book, Gadi Mirrabooka, the stories: “Brolga” and “First Platypus” are excellent examples of Stranger Danger and “The Murray Cod”, is a Creation Map story. Every genre of storytelling and hundreds of categories are used, within The Dreamtime stories.

When the Aboriginal community regularly sat round the campfire following their evening meal and listened to storytellers unfold the stories from the Dreamtime, or tell of daily happenings, such as hunts, battles, etc., the storyteller custodian’s role was really that of cultural educator.

As the Aboriginal culture was an oral one, the written word was unknown to these people. The storyteller’s role was not just to entertain, but also to preserve their culture while educating the growing generation of children and young adults in the history, traditional values and lore of their people.

Often the `aunties’ (older women), told the children stories, to help protect them from dangers – both inside and outside the boundaries of the camp – and to enforce the taboos and traditions of the clan.

Women took girls approaching puberty aside and taught them secret “women’s business”, preparing them for their roles as wives and mothers, to the next generation. There were many “secret women’s” stories, passed on at this time, which men could not be told.

The men told stories of hunting, teaching the young boys vital information. Stories about survival and bushcraft, were embedded in the stories they told. Storytelling played its part in the sacred initiation ceremonies where “secret” information was passed on to young boys approaching manhood. Women were not allowed to know these stories.

When telling the children stories, the storyteller gave no explanation of the meaning of them. All the stories they told carried hidden knowledge that reached down to a much deeper level of understanding. Aboriginal storytelling was similar to our peeling of an onion. Familiarity with the story peeled away different levels of knowledge, until finally the vital information contained in the story would unfold.

When the people heard the stories again, they were asked to repeat them to one another, and gradually with repetition, understanding came.

Some stories passed on information, about their heritage of lands from the Dreaming, the song-lines. Through story, they learned vital survival information, such as how people found the sources of water and the mythology associated with it.

Often a storyteller would tell stories of the night sky and how the figures of animals and people they could see in the collections of stars above them came to live in the sky. Through stories, they learned to identify important stars, which could help them navigate their way around the country, helping them survive when in unfamiliar territory. There were space stories, which explained the arrival of showers of meteorites from outer space.

They learned the habits of all living creatures, animals, birds, fish, insects and plants and were told stories that explained the creatures’ behaviour in certain seasons. This information given in the form of oral stories taught them how these creatures fed and how to track them when out hunting for food. They were taught which berries and fruits were safe to eat and when they were ripe for harvesting.

Stories were told that warned listeners of the dangers of witchcraft, magic and poison, of the wild forces of nature, such as the “whirlie whirlie” winds, violent electric storms, floods, and bushfire and how best to survive them.

There were stories that told of battles and the heroic achievements of their ancestral warriors, while other stories, told of sorcery and duplicity. All the stories had to be entertaining, so that Aboriginal storytellers could hold the attention of their audience. In this way, the storyteller custodian held a highly respected place in Aboriginal society.

Storytelling seems complicated when one is searching for a particular Aboriginal story, because there may be 700 ways of telling the story, depending on the people, land region, type of country and the creature’s habitat. For instance: there are as many different versions of “How the Kangaroo Got Her Pouch” as there are of “Cinderella” in the European culture.

Some early European anthropologists brought some of the “secret men’s and secret women’s stories”, and “secret, sacred stories”, back with them and published them. This was an unfortunate lack of understanding by outsiders of the significance of these special stories. The Aboriginal people regarded them as sacred and part of their cultural property and were greatly offended. They had shared their deepest secrets with these men and their permission to share, or publish them, had not been sought!

Note: It is courteous, if you find an Australian Aboriginal story you wish to tell to always attempt to find the source and ask permission from the Aboriginal Elders, to tell it. 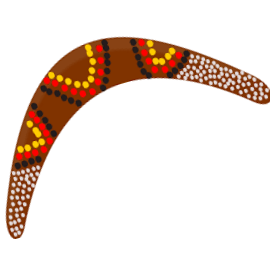 Gadi Mirrabooka – Australian Aboriginal Tales from the Dreaming – is available at: www.gadimirrabooka.com

Published in hard cover format in the World Folklore Series 2001, by Libraries Unlimited division of Heinemann.